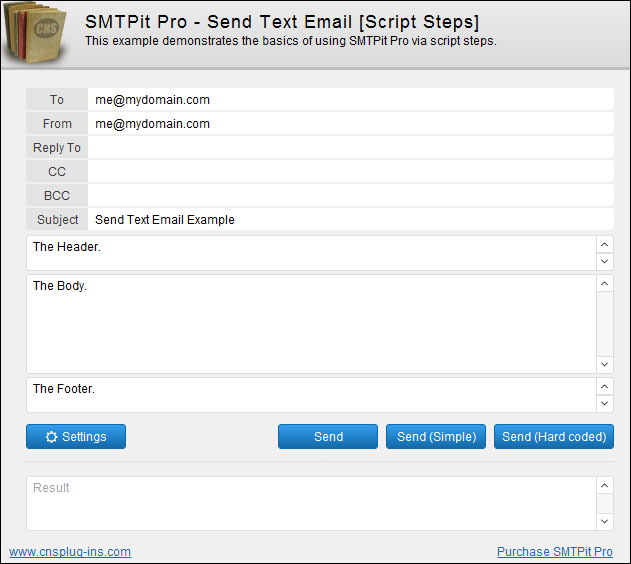 Here you can enter your Host, Port, and Authentication including SSL.

This button performs the “Send” script, and demonstrates a large feature set of sending a text based email with SMTPit Pro script steps by using all of the email fields on the layout. In order to send a very basic message, take a look at the “Send (Simple)” section. This example, however, takes advantage of several SMTPit Pro features including Reply-To, CC, BCC, Header, and Footer. It can be broken down into six basic steps including:

Sending the email is accomplished by using several SMTPit Pro script steps. Be sure to check out the Script Steps, to gain a better understanding of what each script step is doing.

This button performs the “Send (Simple)” script and demonstrates how to send an email with only a few SMTPit Pro script steps. The script consists for four main parts:

It is important to clear out old values before setting new ones so that you do not get unexpected results. If you have set a value in a previous message that is not being set in the current message, the value from the previous message will still be used. For example, if you set a header in your previous message, but you are not setting the header in your current message, the header from the previous message will be used in your current message. The plug-in is purposefully set up this way so that you can set a value and then use it across several emails. For example, you may want to set the body with some specific text and then use a personalized header for each record in a found set. Under this circumstance, it makes sense to set the body once rather than for each record. Also note that you can clear specific values with the clear script step. Be sure to visit the Script Steps section.

####Set Up Host and Authentication

You can set up the host and authentication a couple of different ways. You can do as the database does and use script steps, or you can use the SMTPit Pro configuration dialog.

In this portion of the script, the “SMTPit Quick Set” script step is used to set the from, to, subject, and body. For more information on these script steps, be sure to check out the Script Steps section.

Finally, the email is actually sent using the “SMTPit Send” script step. This script step has a few optional parameters that can be used if you choose to. Again, take a look at the Script Steps section for more information.

For example, in the simple version, the “From”, “To”, “Subject”, and “Body” values are set as follows from fields.

In the hard coded version, the values are stored directly in the script step as follows.

You can mix and match the way you use functions. For example you could hard code the “From” address and use a field for the other values.

You can even mix hard coded values and field values inside the same script step parameter. For example, you could hard code part of the subject and add field data to it as well, like the following.